Cabdriver Ali Omar was in his driveway in Lawrence Heights, about to start his shift, when neighbour Faiza Dirir came over to tell him her news — she’d won a scholarship for a job-training program.

Omar was excited, not just for Dirir, but for himself.

“It gives me the opportunity to say, why not? Like Faiza — she got it, what about myself?,” said Omar. ” I said, maybe finally, your dream come true.” 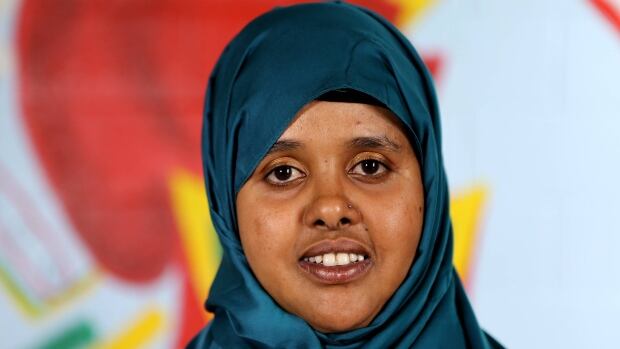 Lawrence Heights resident Faiza Dirir, who helped found a neighbourhood association after a spike in violence in 2008, was awarded a scholarship set up by two developers who are trying to revitalize the area. (Tina MacKenzie/CBC)

Context and Metropia, the developers involved in the revitalization of Lawrence Heights, in partnership with Toronto Community Housing, have begun the first phase of construction in the dilapidated public housing community adjacent to Allen Road.  The developers contributed $500,000 to the scholarship fund.

Dirir’s scholarship will allow her to attend a six-month course at a local training institute to get her Food Service Worker certificate.

The scholarships recognize residents who’ve made a significant contribution to the community, covering up to $3,000 of the cost of post-secondary education or job training.  Dirir and Omar are co-founders of the Lawrence Heights Parents Association. They started  the association following a surge of gun violence in 2008. 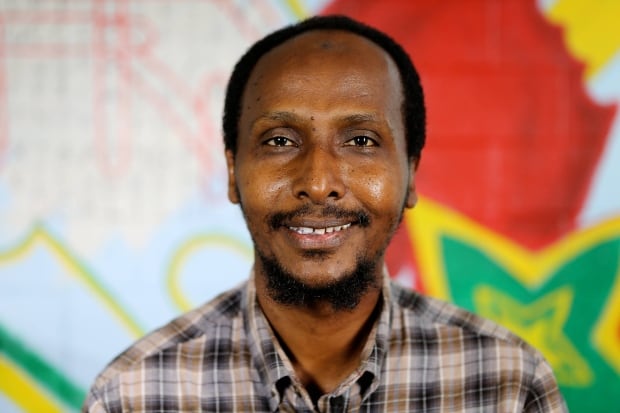 Cabdriver Ali Omar, a neighbour of Dirir, was inspired by the news that the mother of two qualified for the scholarship. He’s now thinking of applying for a scholarship, himself. “I said, maybe finally, your dream come true.” (Tina MacKenzie/CBC)

Dirir, 38, could hardly believe it when she first found out she could apply for the Limitless Heights scholarship.

‘I was so excited,” Dirir said. “I thought it was always teenagers and kids graduating from high school. That’s the moment I remember.”

Dirir, a refugee when she came to Canada, was raised by a Somali grandmother who spoke no English. “I was a fun student,” Dirir said of her high school years in Ottawa.  “Always preparing for the talent show, Black History Month, and drama.”

But her marks were mediocre, and soon there were two children to look after, and little chance of moving up from her job in the kitchen of a long-term care nursing home.

‘She really inspired the whole community’

As for Omar, his goal of a career in computer engineering also began to fade after a year and a half at Seneca College. With six children to care for, and relatives to support back home in Somalia, Omar left Seneca to drive a cab full-time.

But today, Omar’s income has been cut in half, because of competition from Uber drivers.  After hearing Dirir’s news, Omar drove to a nearby Tim Horton’s coffeeshop to think about his own future.

‘It’s tiring driving in the city for 12 hours a day,” Omar said. “I sat for about five, 10 minutes to think about this. I said to myself, is this what you’re going to do for the next 18 years now?”

When Omar told his family he was thinking of applying for the same scholarship that their close family friend, Dirir, had won, two of his sons, already in university, delighted in the chance to turn the tables on their father.

“They say, ‘Oh, at this time, do you think you have the time, the focus to apply yourself?’ And they were asking me, ‘Okay, but if you’re stuck with homework, who’s going to help you for that?’  And I say, now you guys, thanks God, you go to university, so you guys can help me.

But his favourite moment was when his three-year-old daughter asked if he too would wear a backpack like her and take a lunch to school. 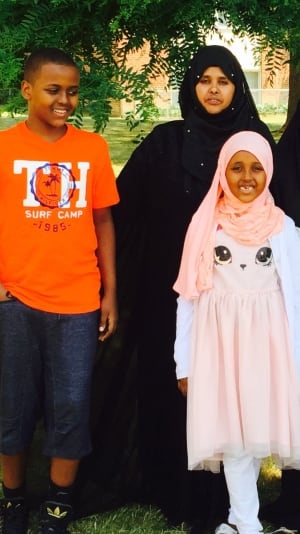 Faiza Dirir says her two children are excited about her return to school. “They ask me, ‘Are you wearing a uniform?’ And my son is like, ‘Okay, it’s not only me who has assignment due …'” (Tina MacKenzie/CBC)

“It was really an exciting day for the whole family,” said Omar laughing. “And they turn to my wife, and they say, ‘What about you, Mommy?’ And she say, ‘If your Daddy going to go back, why not me?’ So, it was really good.”

Dirir says her children were just as excited.

“They cannot wait to see mom doing homework,” said Dirir. “They ask me, ‘Are you wearing a uniform?’ And my son is like, ‘Okay, it’s not only me who has assignment due …'”

By now, the news has spread throughout the large Somali community at Lawrence Heights..

“As a Somali community, we are an oral community,” said Omar.

“One day, a few birthdays come together, and all they were talking about is how they can go back to school.  Faiza, she really inspired the whole community. And she really deserves for that. She is the one who took the initiative,” he said.

“And this one will inspire a lot of parents in this neighbourhood. That’s what I’m wishing for.”

More in Family and Parenting