Anderson Cooper from 60 Minutes has visited Abaarso School and below is the story he did.

In 2008, a man named Jonathan Starr was 32 years old and running a hedge fund in Boston. He was a millionaire, but he didn’t like his job very much, and wanted to do something to give his life purpose. He’d heard about a desperately poor African nation called Somaliland that needed help. Somaliland broke away from Somalia 25 years ago. If you’ve never heard of it before, it’s probably because it still isn’t recognized as an independent country.

Jonathan Starr went there for a visit, and that’s when he came up with a kind of crazy idea. He decided to build an American-style boarding school to help kids in Somaliland get into the best universities in the U.S. and beyond.  Starr hoped his students would then return to Somaliland as doctors, lawyers, business people, and future leaders. 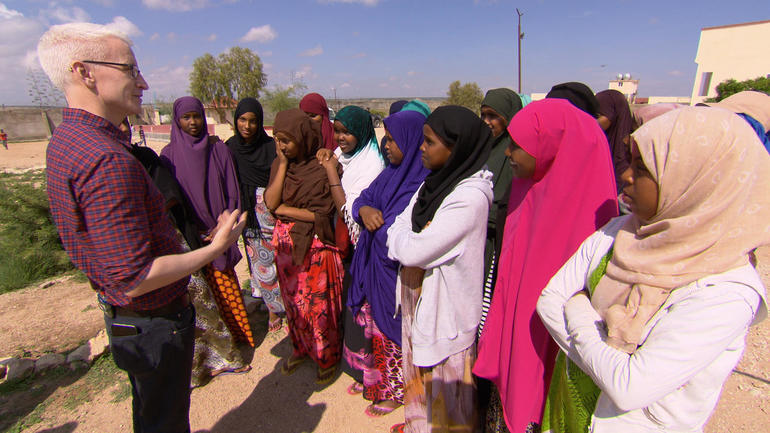 Anderson Cooper speaks with Abaarso students about their dreams for the future. – CBS News

It’s not easy to get to the school Jonathan Starr built. Somaliland’s capitol Hargeisa, isn’t exactly a bustling metropolis. There are few flights in, and once you’re here, it’s a bumpy ride on dusty dirt roads, past miles and miles of empty scrubland. The school sits on a remote hilltop, in what can best be described as the middle of nowhere.

It’s called the Abaarso School of Science and Technology, a boarding school that’s home to around 200 of Somaliland’s best and brightest, grades 7-12.

Jonathan Starr: So the mission of the school is to produce ethical and effective leaders of the country in the future.

Jonathan Starr: Somaliland, Somalia. The point is they’ll be future leaders in this area. And that should be everything. That should be business, government, law, health care– and we have students studying everything. So ultimately, it should work that way.

There was no guarantee it would work that way when Abaarso began accepting students in 2009…but Jonathan Starr was determined.  He’d moved to Somaliland and has spent more than half-a-million dollars of his own money building the school, recruiting the students…and hiring the teachers, nearly all of whom he found online.

Anderson Cooper: How much money were you offering to pay the teachers?

Anderson Cooper: $250 a month. To come to Somaliland.

Jonathan Starr: We cook for them; we have food for them. If they don’t leave campus, they’ll never have an expense whatsoever.

Anderson Cooper: But there’s not a lot to do here.

Jonathan Starr: No, there’s not a lot to do here.

They came anyway, mostly from America. Many had never taught anywhere before.

The curriculum at Abaarso is not much different from what you’d find in an American school. The intricacies of covalent bonding in chemistry, contemporary world literature, geometry, trigonometry, and pre-calculus.

But what makes it harder still is that nearly everything here is taught in English, and most of these kids only speak Somali when they first arrive. Since Starr’s goal is to get students into college in the U.S. and elsewhere, he insists on English immersion from Day One.

Anderson Cooper: So how do you get somebody who– doesn’t speak any English– and immerse them in an English-only program?

Jonathan Starr: I mean it’s very, very challenging. To many of them, the transition to go from where they were to here was the hardest thing they ever would have to do. And you just have to slowly piece it together.

The school starts in 7th grade and students begin by tossing around a few English phrases.

“Wouldn’t it be fine and dandy.”

Then there’s reading, lots of it.

“All African countries are not poor.”

By 11th grade, the kids sound like they’ve been speaking English most of their lives.

“How do the words, the dirty looks, roll off your backs?”

Classes begin at 7 a.m. sharp and the kids have to be on the ball all day, and late into the night. That’s five and a half days a week, 11 months a year. The kids either catch up and catch on to Jonathan Starr’s system, or they’re out.

Jonathan Starr: We hold them to a very high standard. Every student has some job on campus and community service work. If you miss that, or if– let’s say you just skip study hall. You’re suspended.

Anderson Cooper: Suspended for how long?

Jonathan Starr: That’ll be a day. Students have found their way out of our school for not being disciplined, not doing the things that they’ve agreed to do. They know the rules of the school.

If a kid is kicked out of Abaarso, there aren’t a lot of other good options. Somaliland spends less than $10 million a year on its public schools, and we saw some classrooms are crammed with as many as a hundred kids. There are few colleges here for graduates to go to.

Somaliland is doing better than its neighbor Somalia, which it separated from 25 years ago, as famine and civil war plunged that country into chaos. Somalia is still one of the most dangerous places in the world, plagued by the terror group al-Shabaab. Somaliland by comparison is relatively peaceful, though at Abaarso there are armed guards and watch towers.

Anderson Cooper: And the entire compound is surrounded with a wall and barbed wire?

Jonathan Starr: Yes, it’s about 12 feet or so high

Anderson Cooper: Do you worry about security a lot?

Jonathan: We need to be. I don’t think it’s very likely that something would happen, but if something happened to one teacher, it could be game over for the entire school.

The real problem in Somaliland is poverty. This is one of the least developed places on Earth.  The economy, like the country’s biggest export livestock, is skin and bones. The main source of income is money sent from Somalilanders working overseas.

That’s how most students can afford tuition at Abaarso, which is about $1,800-a-year, a fortune when you consider that the average income in Somaliland is about a dollar a day. Those who can’t get money from extended family, get scholarships from the school. Abaarso has become an oasis of opportunity and every student is encouraged to dream big.

Read the rest of the story from 60 Minutes