Afro Deli, the signature commercial business in the 7-year-old African Development Center (ADC) on the West Bank, likely will close by June 30 due to a dispute between Afro Deli’s owner and the chief executive of ADC.

Abdirahman Kahin, owner of Afro Deli said he has no choice because he refused to concede ownership of the popular, profitable restaurant to financially struggling ADC.

“I was the ‘poster child’ business for ADC for years,” said Kahin, a veteran restaurateur and caterer since he immigrated from Somalia in 1996. “I don’t know what to tell my 14 employees, so I tell them to hang tight. We were doing everything right. I’m going to talk to my lawyers.” 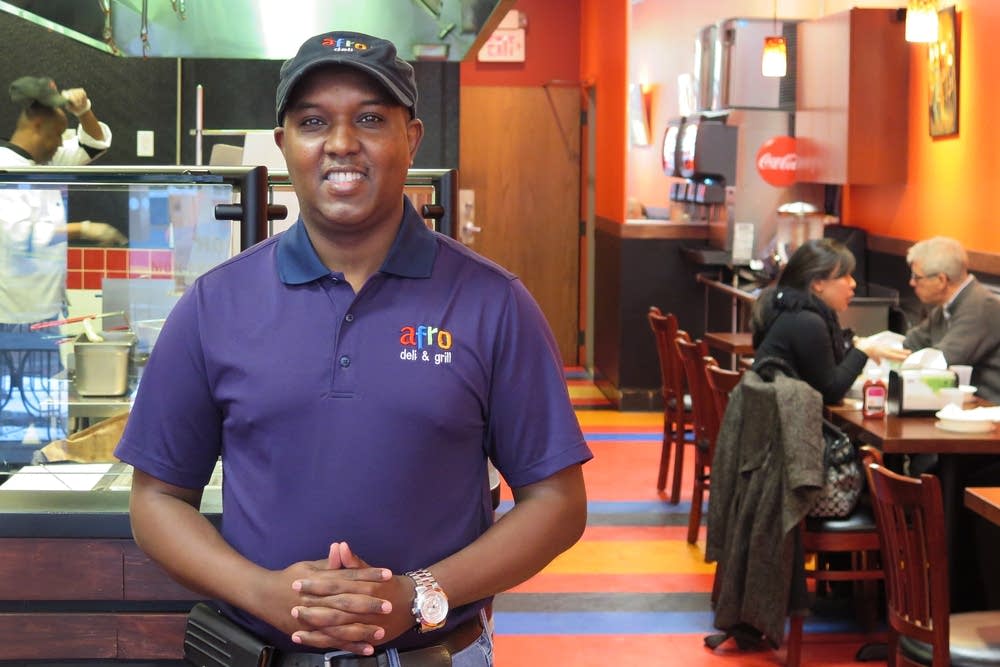 One thing is for sure, this divorce is one doozy of a tenant-landlord dispute.

Executive Director Nasibu Sareva of ADC, who succeeded Hussein Samatar after his death in 2013, said Kahin is not the owner of Afro Deli. Rather, he is more of a partner that Samatar set up in business in 2009 as the flagship commercial tenant of the once-abandoned building that ADC refurbished in 2009-10. The building also serves as ADC’s headquarters. ADC assists African immigrants with financial literacy, business development and finance, and homeownership programs.

“We will close [Afro Deli] and start renegotiation with [Kahin],” Sareva said. “My hope is we can still keep him before we go look for someone else from the community. He says he is the sole owner, but everything was done in a very unique, special relationship. I want him to document things right.”

Kahin said he signed the incorporation papers as owner years ago with Samatar’s consent.

Sareva said ADC invested $100,000-plus to build out the space for the restaurant and that Samatar and Kahin had an understanding that Afro Deli was ADC’s enterprise and that Kahin was more the restaurant’s general manager.

Kahin says ADC put in no equity, but made standard leasehold improvements that he has repaid over the years with rent of $2,500 per month plus half of the net profits that totaled $31,877.58 in the first quarter of this year.

The veteran restaurant operator uses overflow space in the ADC community room during peak hours to feed lunch and dinner customers many days. And Kahin opened a downtown St. Paul branch last year that he said is larger and already a commercial success.

The original restaurant sports a menu that ranges from East African specialties to a Mexican-Somali hybrid offering to hamburgers and fries. The diverse customer base hails from nearby Augsburg College, the University of Minnesota and the local business and residential community.

“My hope is to stay here and that ADC reconsiders evicting one of its best tenants,” Kahin said. “I don’t know what happened. Samatar believed in me. It’s not just Kahin’s restaurant. It’s the community’s restaurant.”

The parties agree on this. The relationship started going south after the inaugural five-year lease expired last December and the relationship reverted to a month-to-month lease. The monthly meetings ended and Kahin ceased sharing financial information with ADC management.

Withholding financials and other information is grounds for booting Kahin, Sareva said.

Meanwhile, nonprofit ADC’s financial situation has deteriorated since Samatar’s death. Revenue slipped from $1.1 million, most from contributions and grants, in 2013, to $776,116 in 2014, the last year for which ADC submitted its financial data to the Minnesota attorney general’s office. Sareva said the soon-to-be-released 2015 tax return will show revenue was static last year.

Sareva has reduced ADC staff through layoffs and attrition from nine to five over the last couple years.

Kahin said ADC owes him $85,000 that he loaned when Samatar was sick several years ago; Sareva countered that Kahin owes ADC $120,000 for a loan that included city money.

This one is headed to the lawyers. Too bad.

The late Hussein Samatar was a one-time Wells Fargo banker, school board member and MBA who learned English at the Franklin Library 25 years ago after fleeing war-torn Somalia. He died of leukemia in 2013 at age 45.

He was a champion of the growing African-immigrant business community, a homeowner in the nearby Phillips Neighborhood who worked to make tough neighborhoods and the city a better, more prosperous place.

He would not be happy with this situation.

Somali Entrepreneur, Zakaria Hersi, Is Reshaping The Tech Industry In Sweden With His New Startup