Teacher Ahmed Amin is counseling Somali-American Abdullahi Yusuf as part of a ‘deradicalization’ program that is viewed as an experiment. Photo: T.C. Worley for The Wall Street Journal

MINNEAPOLIS—The path of reform for Abdullahi Yusuf, a U.S. teenager who tried to become a radical Islamic soldier, passes through writings of Martin Luther King Jr., readings of the U.S. Constitution and discussions about life and literature with a fellow Somali-American named Ahmed Amin.

Mr. Yusuf’s attempt to travel to the Middle East last year helped lead authorities to six Minnesota men who were charged last month in connection with a plan to join Islamic State abroad. The 19-year-old has become a test case for whether Americans lured by Islamic extremism can be deradicalized.

A Minnesota judge earlier this year sent Mr. Yusuf to a halfway house, where he adheres to a tailor-made curriculum aimed at reintegrating him into American society and his immigrant community here. If the program succeeds, Mr. Yusuf’s sentence could be reduced—and the approach to his deradicalization replicated, experts say.

Counterterrorism experts believe it is the first such effort in the U.S. to try to turn a young person connected to a terror prosecution away from an extremist Islamist ideology since the advent of groups like al-Shabaab and Islamic State, or ISIS.

A lot is riding on the experiment, as worries grow about the effect of extremist propaganda in Muslim communities across the country. Most recently, two Phoenix men attempted an assault on a Prophet Muhammad cartoon contest in Garland, Texas. Both were killed by police.

U.S. intelligence estimates that 150 Americans have attempted or succeeded in reaching Syria or Iraq to fight with Islamic terrorist groups. At least 15 of them came from Minneapolis.

“All eyes are on…Minneapolis,” said John Horgan, director of the Center for Terrorism & Security Studies at the University of Massachusetts Lowell.

While the Minnesota effort “doesn’t resemble a full-fledged initiative,’’ Dr. Horgan said, “any failure associated with it will inevitably be used to discourage future efforts” because there is limited openness in the U.S. to alternatives to incarceration since they are perceived as high risk.

Mr. Amin, a history teacher who, like his pupil, came to the U.S. as a boy, didn’t sign on to advise him until after they had met. “I realized Yusuf is a smart, everyday American kid,” he said. “He has a chance to succeed.”

As many as 40 deradicalization programs exist around the world, many in Europe, the Middle East and Southeast Asia. They vary from intensive, formalized programs offering religious education, psychological counseling and job training to informal one-on-one conversations.

Under a program in Saudi Arabia, initiated about a decade ago, former or would-be terrorists receive therapy and religious education from imams, and are given access to sports complexes and art programs. They also sometimes are provided a car and a wife, and jobs for family members.

Saudi Arabia “can do things that will not be possible in Minnesota,” said Jessica Stern, a lecturer on terrorism at Harvard University who consulted on a deradicalization program for the U.S. military in Iraq.

The Saudis have touted their program as having a recidivism rate of just 10% to 20%, according to a report on deradicalization written by Dr. Stern. But one graduate of the Saudi program later became a leader of al Qaeda in Yemen.

Pakistan’s relatively new program takes youngsters aged 12 to 18 off the battlefield and places them in military-run schools. They receive mental-health services, and some are provided jobs after their release.

Any rehabilitation program has to be tailored to the person targeted, experts say. “There’s so much involved in trying to figure out what makes the kid do this,” Dr. Stern said.

Even supporters of deradicalization efforts, like Dr. Stern and Dr. Horgan, say claims about their effectiveness may be unreliable. Lack of data and different cultural standards mean it is tough to know which elements of such programs worked—or if they can be credited at all.

Last May, Mr. Yusuf was detained when he tried to fly to Istanbul from the Minneapolis-St. Paul airport. In court, he admitted that he had planned to reach Syria and join ISIS. His alleged co-conspirator, Abdi Nur, is believed to be fighting for the group. 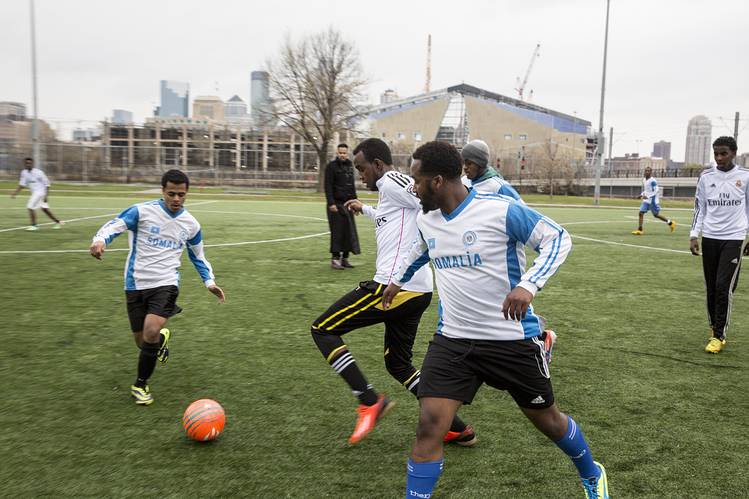 Members of the Somali community play in a soccer tournament in the Cedar Riverside neighborhood in Minneapolis last month. Photo: Ackerman + Gruber for The Wall Street Journal

Federal prosecutors charged Mr. Yusuf with conspiring to join a terrorist organization, which would typically keep him in jail until trial. But Chief U.S. District Judge Michael Davis, after reviewing documents and hearing arguments from his attorneys, agreed to allow Mr. Yusuf to undergo rehabilitation at a halfway house until his sentencing. A sentencing date hasn’t been set.

Mr. Yusuf hasn’t been made available for interviews, and details of the program haven’t been released. But his attorney, Mr. Amin and the head of the nonprofit overseeing the program agreed to disclose some aspects of it.

“This is brand new,” said Mr. Yusuf’s attorney, Jean Brandl. She deemed the process for his rehabilitation “careful, deliberate and slow.” She said she is convinced that Mr. Yusuf has the potential to be “a contributing member of society” and an “emissary to his community.”

Heartland Democracy, the Minneapolis nonprofit handling Mr. Yusuf’s program, said it adapted a “civic-engagement” curriculum about identity and values for at-risk youth to a program specifically for Mr. Yusuf.

Mr. Yusuf, who wears an ankle monitor, leaves the halfway house with an escort only to visit federal offices, see his attorneys or meet with religious scholars, Mr. Amin or Mary McKinley, Heartland Democracy’s executive director. Ms. McKinley formerly worked on national security issues at nonprofits including the Aspen Institute.

The teenager has become an avid reader of the history books, essays and poetry he has been assigned, his mentors say. He then composes commentaries about them for discussion with Mr. Amin.

Recently, Mr. Amin, who has a master’s degree in education, asked Mr. Yusuf to read an article about what inspired Native American author Sherman Alexie, the first in his family to go to college, to start writing. Mr. Alexie discusses a poem titled “I am the reservation of my mind,” which helped him realize the limitations he placed on himself and those imposed by society.

“I told him he had to go home and think about the reservations of his own mind—who he is, what he wants to become—and then write a poem,” said Mr. Amin.

Mr. Yusuf also has read Richard Wright’s “Native Son,” about an African-American unable to escape the poverty, violence, and discrimination that afflict his Chicago ghetto and American society in the 1930s.

Mr. Amin said that Mr. Yusuf wrestles with challenges facing many Somali-American youngsters, who may feel caught between two worlds: that of their conservative parents intent on him preserving their culture and religion and that of free, secular America.

The U.S. is home to about 155,000 Somalis, according to the Pew Research Center. The majority are refugees from civil war, and began arriving in large numbers in the mid-1990s. In Minneapolis, site of the biggest Somali community, large families crowd into government-subsidized housing. With limited education and skills and years stuck in camps, many adults struggle to make ends meet, according to advocates, who say that more than half of Somali families in the area live below the poverty line. Most are observant Muslims.

“There are strict rules about what it means to be Somali, like being obedient and doing whatever your parents want and practicing your religion,” said Mr. Amin. “Then you go outside to the world, and you can do what you want—and you want to fit in.”

Mr. Amin said some students who attend the high school where he teaches shed their traditional Somali garb and change into clothes of urban American teenagers for the day.

Until last year, Mr. Yusuf, whose father is a commercial van driver and whose mother is a homemaker, seemed to be on a routine track. He finished high school and attended community college. Tall and thin, he loved playing basketball, said his mentors.

Like other Somali Americans lured by extremists, “what is puzzling is that they seem to understand how the [U.S.] system works and what they need to do to get ahead,” said Mr. Amin, “but there is a stronger force that pulls” them toward extremism.

As he sees it, Mr. Yusuf and his peers have to figure out how to be a “hybrid”: a person who can feel American while still identifying with both cultures.

“There are a lot of people thinking we should lock them up and not give them a chance,” said his attorney, Ms. Brandl. “But he shows there is reason for hope.”