Of the roughly one million migrants who arrived in Europe by sea this year roughly a quarter, according to the UN refugee agency, were children. British barrister Hashi Mohamed, once a child refugee himself, went to Italy to meet some new arrivals – and with one in particular he made an immediate connection.

On an Air France flight from Nairobi to London, 10-year-old Ali is excitedly marking a piece of paper with crayons. He feels a little panic when the flight arrives in London – he wants to return the materials, but where is the flight attendant? When she finally appears she assures him that he can keep them. “Take them with you,” she says.

That was my elder brother, Ali, and his most enduring memory of our arrival to the United Kingdom. It was July 1993.

A year or so before, Ali and my other siblings and relatives had fled from Somalia to neighbouring Kenya, on the outbreak of war. A year younger than him, I had been born in Kenya and we had met for the first time not long before our flight to the UK, to start a new life as refugees. We were without our parents. Our father had died just months before this and our mother would join us four years later.

We barely spoke any English but we were treating the whole experience as an adventure.

This is how it used to be for some of those fortunate enough to flee war. Looking back now it feels seamless, though it certainly didn’t feel that way then.

Fast forward 22 years and the situation in Somalia is little changed. Not all are fleeing conflict now, but people continue to seek a better life abroad, whether that be in Europe or North America – often by any means necessary.

Their journeys now are far more frightening and treacherous.

Earlier this year I met a 16-year-old at a drop-in centre for recently arrived migrants in Milan. His name was also Ali. He had come from eastern Ethiopia where there’s a Somali minority. 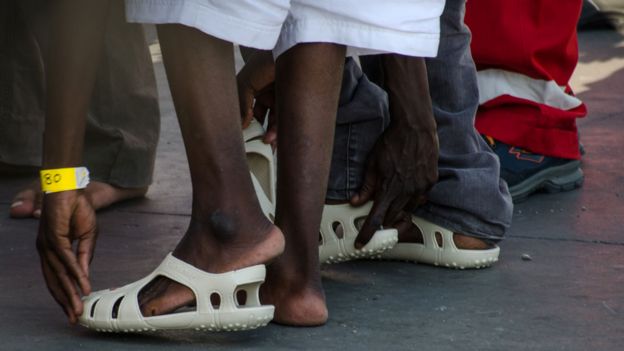 His story was remarkable.

Ali journeyed from Ethiopia through Sudan and the Sahara desert en route to Libya. At some point the vehicle in which he was travelling got stuck in the sand, and as Ali helped to free it he ended up being run over. He fell into a coma and some of his companions wanted to leave him for dead – but others outvoted them and four days later he returned to consciousness.

Eventually Ali found himself in Libya, where was imprisoned for a period and waited for his family and relatives to send him money. He paid $1,700 for a boat destined for Italy only to be told that it had left without him. The smugglers duly informed him that there would be no refund.
Find out more

He spent more months waiting for more money to pay for the next boat ride. It would cost him another $2,000 to reach the port of Palermo in Sicily. The money was being sent by relatives back in Ethiopia and elsewhere, many of whom he had never met. He never imagined he would make it.

But now, in Milan, I asked where he was headed. He surprised me with his answer.

Why Finland? He had heard it was the best place to go – that there were good schools. I walked over with him to a map of Europe on the wall, and asked him to point to Finland – or even Italy.
Image caption Ali’s finger on the map 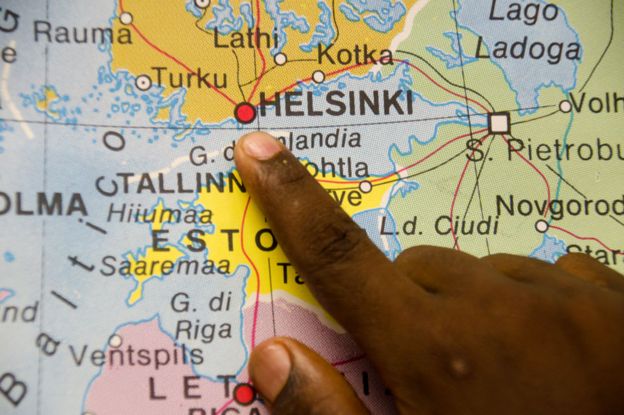 Ali’s finger on the map

Having just arrived the day before, he said: “I don’t know, I’m completely disorientated, how do you expect me to point out Finland?”

But what was clear was that Ali was being driven by an idea. The idea of Finland and the idea of a better and more secure life in Europe.

My brother and I were granted entry to the UK with ease. We had other relatives in the country who had sought asylum just before us. We were taken to an aunt’s place in North Wembley – a widow herself, she had six children of her own, and had arrived a few months before. Over the next few years we lived in seriously cramped conditions of five to a room, young and older siblings, parents and cousins. 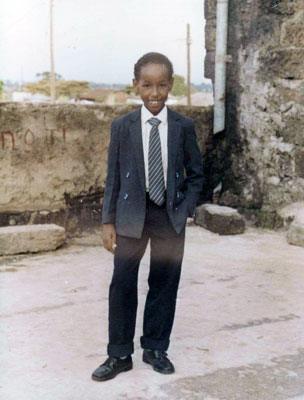 Me in Nairobi, shortly before leaving for London

We were fascinated by street lights and open fields where we could play football and just be children, though I recall vividly some experiences which were dehumanising and humiliating. One in particular was to do with housing.

We often walked what seemed like a very long distance (one-and-a-quarter miles) to Mahatma Gandhi House, Brent Council’s housing office, in search of better accommodation. Having little understanding of the language, and still less of council procedures, for years we were sent from pillar to post. With food vouchers for milk and bread secured, we lurched from one squalid temporary accommodation to the next.

I remember clearly the disdainful look housing officers gave us when we desperately tried to express ourselves in English. I promised myself to never have to experience that again. We didn’t know if a queue for basic housing existed let alone understand how to jump one. When my mother arrived with my youngest sibling four years after Ali and I had, we had to start the whole process again, and waited for 10 more years for permanent housing.

I refused to accept that this was what my father had planned for us.

Talking to migrants in Italy, I heard many stories of long expeditions and treacherous territories, of near deaths and major gambles. I met many children who travelled many miles, but have never known any childhood.

Ali, despite the horrors he had faced – alone – was upbeat and described his stop in Milan as the “last stage of Italy”.

Two months after our meeting, I managed to track him down via social media. I asked him to send me a number, then called him. He said he had made it to Munich, in Germany where he had been fingerprinted – effectively ending his quest to reach Helsinki.

Ali told me that he was being housed in a foster home with three other Somali boys, and that he was experiencing discrimination in German on a daily basis. He said rumours were rife in the German media that migrants “are going to be sent back”.

“I fear that my whole journey would amount to nothing,” he said.

My physical journey to Britain was remarkably unremarkable – a luxury unfortunately not granted to many of today’s migrants to Europe.

My brother Ali remembers that the only alarm of his journey was the episode with the crayons. This Ali has had to endure so much more.

What the two Alis share, what most of these people on the move have, is that burning desire to seek peace and security, a future that is better than the past.

For children, the dangers are even more profound. The law is for the most part on their side, but they have to reach Europe first to understand what that means.

Source: This story first appeared at BBC. It is written by Somali Barrister and Journalist Hashi Mohamed as a part of a documentary he did. More to follow.

A Maine Mill Town and the 5,000 Refugees Who Call It Home

On Wednesday, May 27, 2020, "A group of Somali entrepreneurs in Minneapolis say they are being racially profiled at a private gym in a video that has gone viral" by Sahan Journal #AllThingsSomali ...

A group of Somali entrepreneurs in Minneapolis say they are being racially profiled at a private gym in a video that has gone viral.
View on Facebook
·Share

Brave Young Somali Girl throws back gas cannons at the police. She is a true Hawo Tako without fear.

Last night, protesters mourning the death of George Floyd—the Black man killed in Minneapolis by the police on a bright daylight—took to the streets to show their ANGER with the system and police brutality.

Tom Austin did not like seeing the young men in the same gym he uses at WeWork in uptown, Minneapolis. He threatened to call the police on them after they refused to answer his questions.

This happened a day after a Black man was killed by Minneapolis police in front of the public.

Somali community in Minnesota lost another national treasure to Coronavirus.

Late in life, artist was ‘living his dream’ as work was shown at prominent Twin Cities venues.
View on Facebook
·Share

Somali community in Minnesota is looking for this young man, Ridwan Dahir, who is believed to be missing. Please read the story from our friends at Sahan Journal and help this Somali mother find her son.